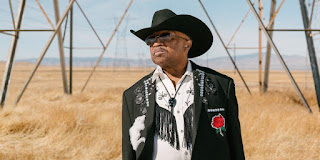 Why wasn't I born / With orange skin / And green hair / Like the rest of the people in the world? / I was born blue.  Wanna lose yourself for an hour or two while you're avoiding public gatherings?  You could do worse than to follow some threads to track down live video of Swamp Dogg plying his trade on the concert stage.  Born Jerry Williams, he pursued a somewhat more traditional strain of R&B and soul under his given name for a time, before adopting his less anonymous moniker and encouraging his musical attention to wander much farther afield.  As Swamp Dogg, he has spawned more than twenty records that ranged from novelties to social commentary, from disco to classic rock with stops in psychedelia, soul, R&B and more.  In 2018, he worked with Bon Iver's Justin Vernon and others on Love Loss & Autotune, a critically lauded exploration into the world of vocal manipulation.  Through all the disguises and diversions, Swamp Dogg has always proven to be an underappreciated soulful singer, one who insists that beneath all the trappings he's just been singing country music all this time.

No, you won't be too deep in the high lonesome while enjoying "Let's Bump the Donkey", but Swamp Dogg's biggest legit hit to date has been "Don't Take Her (She's All I Got)", a chartbuster he cowrote with friend Gary US Bonds for Johnny Paycheck in '71.  And a couple decades ago, he joined with a group of country session vets to create Don't Give Up On Me, a collection of country originals that wouldn't see the daylight until many years later.  Now Swamp Dogg has shared Sorry You Couldn't Make It, as seemingly a straightforward celebration of country music as you could imagine from the lifelong iconoclast.

To assure that Sorry won't be mistaken for a Kane Brown project, the artist has invited Justin Vernon back into the studio, along with Jenny Lewis, Sam Amidon and members of Polica.  You'll also recognize the voice of John Prine on a couple tracks.  "Please Let Me Go Round Again" is a melancholy look back at misspent opportunity, including some good natured banter between the vets: I've been a reckless ramblin' restless rover most of my life / Everything has been a series of mistakes / Ain't never done nothin' right.  "Memories" strikes a similar tone, even as the sound disintegrates into static and feedback like a fading photo.  Swamp Dogg has famously covered Prine's "Sam Stone" over the years, and either new track would not sound entirely out of place on John's recent collections.

Sorry You Couldn't Make It recalls another document of career resurgence in Solomon Burke's 2006 Nashville project.  Both feature tremendous vocalists whose instruments have aged well.  But while Swamp Dogg handed over the producer's leash to Ryan Olson, it's his particular vision that drives these new songs.  Among his strongest songs to date, "Sleeping Without You Is a Dragg" rides on a satisfying bed of organ and guitar, a click track keeping time.  My nerve's upset, he croons, My head's in a bag / Sleeping without you is a drag.  That same reverence for deep Southern soul powers the grooveworthy "Good Better Best", a song that Mavis Staples might do well to consider adding to her set.  "Family Pain" adds a dark twang guitar and fiddle to a song that bemoans the pervasive effect of inherited addiction, All going out together smoking crack and dealing cocaine.

There are moments on Swamp Dogg's new collection that serve to remind us that even though the country roots run deep, we're not at the Opry anymore.  The writer's barbed and irreverent humor aren't given their typical lead here, though there are some subtle sonic choices that skew the record in a slightly less traditional direction.  "Billy" is a wonderfully maudlin take on the singing to someone in heaven sub-genre, even as it sounds like something that might've found its way onto a Bobby Goldsboro disc.  It's delivered from the perspective of a father paying another visit to his wife's graveside: Oh, how silly of me / I left out what I came to say / I wish you could've seen Billy this morning / He took his first step today.  While Paycheck's take on "Don't Take Her" hasn't aged well, Swamp Dogg's recording updates the song with soul and substance.

Celebrated critic Robert Christgau has written, the only person that owns every Swamp Dogg album is Jerry Williams himself.  In many ways, Swamp Dogg has been overlooked.  Now in his late 70s, he's often reduced to a novelty, a Zappa-like figure with a penchant for raunch and a short attention span.  But follow those concert recordings to see that the truth lies much deeper.  And give Sorry some repeated spins as a reminder that Jerry Williams is a genuinely soulful singer and a writer of rare gifts, a unique artist who is beholden only to his own imagination.


Head on over to A Routes & Branches Guide To Feeding Your Monster to witness our wide array of forthcoming records.  It's nothing less than an entire year's listening, masquerading as a release chart.  This week, we celebrate the long-awaited date for Dixie Chicks' first record in fourteen years.  Gaslighter should land on shelves by May 1.  With his last record, Damien Jurado began holding court at his new label, Mama Bird.  They've announced May 1 as the release for Jurado's What's New Tomboy.  Brian Wright shares his name with a couple other un-roots artists.  Which sometimes makes it tricky to track down his stuff.  Keep a finger on May 8, when he'll be issuing Lapse of Luxury under the moniker Brian Wright & the SneakUps.  Courtney Marie Andrews' first couple releases have earned coveted spots near the top of our year-end favorites parade.  She'll be sharing Old Flowers via Fat Possum on June 5.  And John Craigie has surrounded himself with a hearty band of supporters for Asterisk the Universe, slated for June 12.  Your weekly ROUTES-cast: