Guess what.  I've heard contemporary music, and it sounds very little like americana.  I actually spend a moderate amount of my time listening to stuff that you'd see on the pop charts, more because I want to know rather than because it feeds my musical monsters.  It's by no means a value judgment against americana, though it's no secret that my ears tend to orient towards more forward thinking roots music. Much of the most obvious variance comes in terms of production quality, with those pop tracks sounding so different than even the radio songs of ten or fifteen years ago. 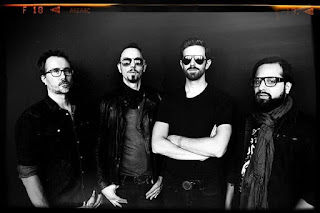 I mention this by way of intro to Hollis Brown's new Ozone Park CD.  Ozone Park is the name of a neighborhood in the band's native Queens, a nod we've come to expect from an outfit that proudly reps their New York roots.  We've been keeping tabs since the release of 2013's Ride On the Train, a fine roots rock collection that immediately called attention to Hollis Brown's way with a melody on songs like "Down On Your Luck".  The act's next move was an unexpected but revelatory one, releasing Gets Loaded, a full-scale reimagining of Velvet Underground's 1970 classic.  Unleashed for Record Store Day 2014, the remarkable thing about the session was that it found Hollis Brown avoiding the criminally common practice of simply trying to replicate the LP's sound.  Instead, the collection presented the Velvets honored, updated and boldly revisioned in a more contemporary vein.  2015 brought us 3 Shots, followed by a strong Cluster of Pearls EP.  Which all set the stage for Ozone Park.

Frontman Mike Montali and guitarist Jonathan Bonilla are the heart of Hollis Brown, generating an unexpected amount of electricity and edge on record and on stage.  The duo are also the tightly woven thread running from project to project, with each release expressing a different shade of the band's musical prism.  On Ozone Park, the challenge was to create an "American rock" record for 2019.  While the roots still show on certain songs, the new set communicates fluently in a language of pop and soul.

"Blood From a Stone" bounces on a solid pulse, featuring swirling synths and "Miss You" backing vocals.  The piano line recalls early soul numbers, the string break evokes a disco track and the production is 100% contemporary.  Vocalist Montali has always presented himself as a frontman with more swagger than most, but here he breaks through as a vibrant force of nature.  "Stubborn Man" is a blues belter with a soulful pop heart, a barefaced admission of independence:  Baby don't you tell me that you really want me / it's not the kind of thing that I want to hear / Because I'm gonna do the things I gotta do / I see anyone in the world I wanna see / I know I'm being bad ... That's just who I am.

Some of that roots rock shines through on "She Don't Love Me Now", a groove-forward track with some great keys and a sweet vocal breakdown.  "Someday Soon" adds a jangling guitar to a more laid back arrangement, sounding like a less lazy take on Whitney's breezy pop.  Ozone Park balances any retro reference against a more contemporary gesture, solid beats and droning synths.  Hollis Brown are proficient in either language, but like the Revivalists they wouldn't look out of place on a festival stage (Montali and co. were actually signed to the Summer's ill-fated Woodstock anniversary).

In a recent interview, the band raised names like Red Hot Chili Peppers, Springsteen and Counting Crows as inspiration for this most recent iteration, adding Wilco for good measure.  Listeners won't necessarily recognize these connections, however, since Hollis Brown are first and foremost loyal to their own sound.  Producer Adam Landry has worked alongside the band since their earlier days, and conjures the same magic as he has with acts like Nikki Lane, Deer Tick and T Hardy Morris, all artists who have successfully challenged the limits of their respective genre.  Most importantly, he has collaborated with Hollis Brown to create a project that simply sounds relevant.

We're ushered into "Do Me Right" with a drawn out synth drone, punctuated with Strokes-like stabbing guitar and drum.  While the sound is updated, there's a distinctly Stonesy spirit to Bonilla's guitar, fierce but loose here, defining his own pocket on so many of these cuts.  "Bad Mistakes" turns up the fuzz factor a'la Black Keys, adding some dark and heavy bass.  Ozone Park's most interesting turn begins with a cold and distant guitar before sliding into the soulful ballad "Forever in Me".  Click drums are balanced by Mike Montali's falsetto croon; strummy acoustic is paired with a solid bass line:  We go so good together / You might think that it was meant to be ...  You found forever in me.

Sons of Bill took a similar risk on last year's Oh God Ma'am, sidestepping expectations in an effort to realize the far reaches of their sound.  Even from those earlier days, Hollis Brown have always hinted at the more of their own promise, exploring the soul and pop connections inherent in their roots mix.  Ozone Park wasn't what we imagined in Ride On the Train or Gets Loaded (really, track this one down!), but we wouldn't want it any other way.  And it's just the sort of challenge that our kind of music needs.

Next week's Episode, we'll pause just a moment to share our thoughts about the first half of 2019. We'll give some consideration to our favorite records so far, as well as smacking our lips for the next course.

So what's up with A Routes & Branches Guide To Feeding Your Monster - our much heralded new release calendar?  Welp, this week we added rumors of a special Deluxe Edition of Jason Eady's I Travel On from last year.  Never heard of Western States?  Us neither.  The band is composed of vets from the St Louis roots scene, planning on a July 19th release date for their debut record.  Dualtone Records has snagged Australia's Angie McMahon for her debut stateside release, Salt, boasting songs about "life, love and takeaway food".  St Louis singer-songwriter Beth Bombara guarantees a more upbeat set of tunes in Evergreen, and by now we all know exactly what to expect from Hold Steady.  They'll be collecting all those recent singles into a new package for August 16th.  File Jason Hawk Harris' Bloodshot debut under "eagerly anticipated".  Seattle indie-folk'er Noah Gundersen has set his sights on August 23rd for his next collection, the provocatively titled Lover.  Come September, we'll be expecting deliveries from a couple R&B faves:  Andrew Combs will drop Ideal Man on the 20th, followed close behind by Leif Vollebekk and New Ways.  Spin your weekly ROUTES-cast while you're taking notes: